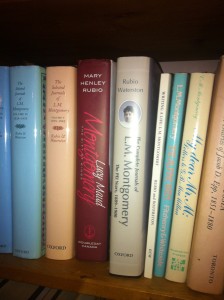 “I think I’ll have to buy this,” I said to my son, holding out The Complete Journals of L.M. Montgomery. “Of course you will,” he said, knowing how many books by and about Montgomery line the bookshelves at home. I had already read all five volumes of her Selected Journals, compiled by the same editors, Mary Henley Rubio and Elizabeth Waterston. The entries in those earlier volumes were selected to emphasize Montgomery’s life as a writer, omitting many entries describing her moods, her everyday activities, and her favorite landscapes.

Yet, even though many journal entries don’t relate directly to the development of her writing career, they often feel as if she is practicing. She may have simply been trying to express her enchantment with a beautiful scene, but she does it in what seems like a consciously literary way, in sentences like these: “The sea was an expanse of silvery gray. Afar I saw the purple slopes of New London scarfed in silvery hazes” (p. 24, entry for Thursday, April 10, 1890).

As vivid as these passages are, I prefer the accounts of everyday events: visits with friends, conflicts at school, outings to the seashore, etc. They’re written in a lively style, with a great deal of wit— sometimes lightly mocking, sometimes tart and sarcastic. (There are many gloomy passages, too, detailing Montgomery’s loneliness and depression, but I haven’t gotten to those yet.)

Montgomery started a journal to record what she thought worth recording. It became a place where she could vent her feelings and say things she couldn’t say anywhere else. But the practice of writing a journal was, for her, also an important part of the discipline of writing.