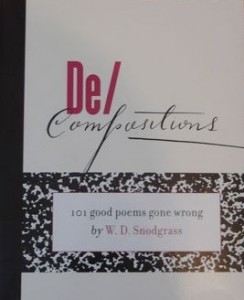 The prolific American poet W.D. Snodgrass, in his book De/Compositions, asks the question: What makes a good poem good? and what happens when you remove that quality? The short answer is that you spoil the poem, but the particular ways of spoiling poems are what make this book so intriguing.

Snodgrass takes poems by W.H. Auden, Shakespeare, Marianne Moore, William Carlos Williams, and many others, and “de/composes” them. That is, he rewrites them in a way that removes some essential quality of the poem.

It’s a mischievous experiment, in a way—a bit like pulling half the legs off a spider and then seeing if it can still walk— but also an enlightening one. For instance, when you read “The Miller’s Wife” by Edwin Arlington Robinson side by side with its de/composition, you realize just how much is conveyed by hints and implications in the original, and how stating the facts baldly takes away the reader’s experience of suspicion and discovery.

Snodgrass’s treatment of “Globe” by Elizabeth Spires is an exaggerated demonstration of the maxim “show, don’t tell.” Evocative lines like “A high window let in alley light/ to a two-room apartment” are reduced to “Our home situation was dingy/ and constricted.” It is comically bad.

In other poems the de/composed version is not as obviously spoiled. Marianne Moore’s “The Mind is an Enchanting Thing” is reduced from an accomplished and beautiful poem to a merely competent one by the removal of all rhyme and, more subtly, by word choices and syntax that make the language less musical. “Like the glaze on a/ katydid-wing” becomes “like the patina on the wing/ of a katydid.”

With “Queen-Anne’s-Lace” by William Carlos Williams, Snodgrass decides to remove all line breaks. What’s interesting here is that rendering the poem in prose does not exactly wreck it— the language remains unchanged— but transforming it like this does have a marked effect on the pacing. As a prose paragraph it simply goes by too quickly.

It’s worth taking your time with this book, because Snodgrass’s game is surprisingly effective. Change a poem’s meter, remove its allusive language, displace its climax, and you see how these things help make the poem what it is.

There’s no checklist for what makes a good poem here, though. Some general principles, maybe, but there’s always one poet who can go against some essential principle and write something brilliant. Snodgrass acknowledges this unapologetically. Learning to find the riches in good poetry is a long process, he says, but that’s quite all right.